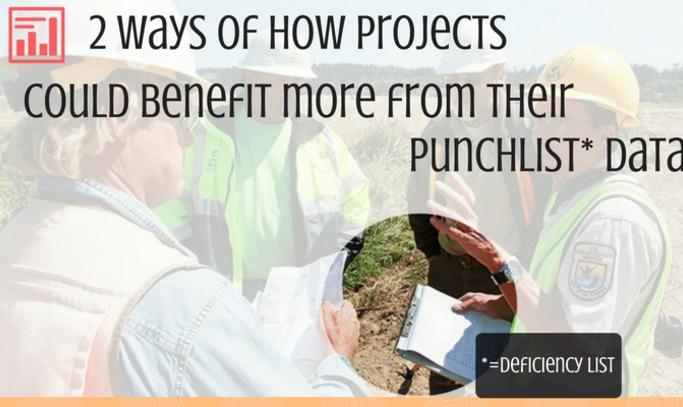 According to Edward W. Merrow, founder of Independent Project Analysis, Inc. (IPA), 65% of the Megaprojects fail either with the budget or with the time. Although it might sound silly, how often did the projects go through a “lessons learned” session before the kick-off? Do they use any information out of the list of the deficiencies known as punchlists?

A punchlist is aimed to keep a registration of the deficiencies in a project with the intent of fixing them before the turnover. It is not only “a honey-to-do-list” but a lot more than every project should take advantage of if using the data efficiently. This post highlights the importance of including the “contractor” information in each punch item, and by doing so, it becomes easier to upgrade the punchlist data into a dynamic tracker and also into a consolidated report for a “lessons learned” session, which will provide further visualization of other aspects of the project.

It is important to clarify that by “punchlists” I am referring to “walk down punchlists.” They are those deficiencies found during a joint walk down to a substantially complete scope (80-90% of a system, subsystem or discipline, although this criterion might vary in every project), as opposed to those deficiencies during construction.

First, let’s look at a classic punchlist template in figure 1 (each project has a different one with more or less information):

In most of the projects the mandatory fields are:

In some projects, the “contractor” information is unknown as it is intended to assign a contract to exclusively “clear punchlists” at the end just before the turnover. In that case, I always suggest using “TBA” (To Be Advised).

Due to budget reasons, many small projects use spreadsheets and manage punchlists like tally books, and I don’t blame them as long as they don’t need analytics or complex information out of it; otherwise, a good and properly configured database is the way to go for punchlist management.

Going back to the punchlist template information, when the “contractor” data field is mandatory is easy to produce reports like the one below ( Figure 2)

​Then, in MS Access, I was able to upgrade this data management into a dynamic tracker showing the progress of the “acceptance” by Contractor, CMT (Construction Management Team) and Commissioning/Operations separated in columns by contractor too (figure 3). (Punch list, Deficiency)


Definitively, big corporations and constructions companies involved in multiple and continuous projects will benefit from analytical reports out of the punchlist database during the lessons learned sessions at the end of each project.

What was the common denominator in punchlists from contractor “Z” or “X”?
What was the most common deficiency with “switch gears”?
What contractor was more affected with “material delays”?
Wouldn’t this information be helpful when negotiating terms during the next bidding process?
What actions could be done in the next project to prevent or reduce the impact of those issues?

The more information submitted in the punchlist, the better will serve to produce a consolidated report that will become a valuable asset for the next project. Paradoxically, many people treat the punchlists as blacklists that once cleared are not looked into anymore.

Punchlists are lists of deficiencies but what does the project do with such in the aftermath? What did the project learn out of them? Is your project using analytics out of them? What if we include NCR (Non-conformance Reports) and CAR (Corrective Action Requests)?

And what about the closing of punchlists? Using punch cards or not? Electronic signature? What are their pros and cons? I will talk about it in a future blog post.

Thanks to all the people that gave me their feedback on my first LinkedIn article. I certainly welcome all your comments.

Have a nice day!

Eric Ocampo is a Project Management Professional and Microsoft Access Certified Specialist with an Electronic Sciences Degree. He is a proactive Database Administrator/Developer that has worked in Construction, Oil & Gas projects in North and South America, and the Middle East since 2001. He has worked in Mechanical Completions as SCDBA of QEDI and WinPCs systems, and as a Database Developer, he has developed applications for Project Turnover, Completions, Materials, Preservation, Dossier reviews, Weld Tracking, Instrument loops, etc.

His early experience includes a role as MWD (Measure While Drilling) Operator with Anadrill Schlumberger.